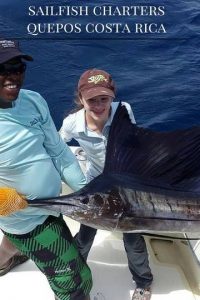 Deep sea fishing reports are getting better for Sailfish released

The month of June was rough for all fishing boats in general.  I must be specific and say that the fishing still remained good but not for Sailfish which is perhaps the most sought out fish by anglers visiting Quepos, Costa Rica.  There was still action for Yellow Fin Tuna and Marlin but the Sailfish were very low in the fishing reports from the Quepos Fleet of Boats.

Is the fishing for Sailfish getting better?

Well, we are know in the end of July and the fishing for Pacific Sailfish seems to be getting better.  As is typical, the month of June comes with slow action for Sailfish but it always kicks back again for the end of July and it stays that way for the remainder of the season.

Fortunately, the fishing in Costa Rica is some of the best you will find around the world, so even though the Sailfish were low, we still got our clients one some excelent fishing action for Yellow Fin Tuna, Marlin and Mahi-Mahi. Most of the action was found between 20 to 30 miles offshore.

If you are planning your vacation to Costa Rica in the month of August through November you should expect to see some rain showers but that will not affect you when fishing with our Luxury Air Conditioned Cabin Boats and the rain does not affect the fishing, in fact, some anglers say it makes for a better day of fishing.

Catch A Big Fish in Quepos Costa Rica With Reel In
March 4, 2018